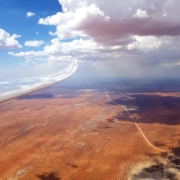 Bernd Goretzki and Reinhard Schramme flew almost 600km at 232 kph OLC speed! It must be one of the fastest flights in thermals.

Saying that Bernd is known for his really impressive long-distance flights is an understatement. He is the current OLC Europe vice Champion with eight flights with more than 1 000 km in Europe in 2019! We already wrote several blog articles about his flight preparation, and that I can only encourage you to read. Bernd was already in Namibia this November, and more exactly in Bitterwasser, flying an EB28 with another exceptional pilot: Reinhard Schramme. Reinhard is a competitor, winner of the last Hahnweide competition, and the current World Speed-OLC vice champion. These two are not only complementary, they are also friends and enjoy flying together. So, we can say that the EB was in expert hands. After 3 days in Bitterwasser, they had already flown more than 3 300 km. So, the week had started well with very good weather. And they were not the only one enjoying it; just on Monday (2019-11-04), 10 other gliders completed their 1 000 km flight in Namibia and South Africa. However, today’s article is not about a long-distance flight but about speed! Indeed, on Tuesday (the 05th November), they flew 581km at 232 kph XC speed (for OLC). It might be one of the fastest flights under cumulus clouds.

For Tuesday, the general situation was extremely promising with a potential convergence.

The convergence line builds up at the confluence of two airmasses. In our case, the one in the east (coming from Zambia or Botswana) was filled with (latent) energy and moved further southwest in the general flow. The other one was Kalahari’s normal airmass with a south-westerly wind of the Namib Circulation. This special situation was triggered by the end of dry convective season in Zambia and Botswana in these days. High cloud bases (>6 000m MSL) are appearing from September to early November in that region without any safe outlanding fields, showing beautiful soaring conditions. In combination with first moisture of the rainy season, which propagates now from the equator into the south-westerly regions of Nambia in January, the air was filled with energy. The homogeneous airmass and topographic structure over the Kalahari initiated the convergence as a linear structure. It appeared for over 1500km in length down to South Africa and persisted for several hours.

So, when Bernd and Reinhard saw that the wind forecast was showing the development of a convergence line, 100km from Bitterwasser axed NNW-SSE, they knew that it would be a good day for as speed flight. The convergence was forecasted to become stronger later in the afternoon suggesting that a “speed task” would be more adapted.

They took off and managed to reach, just before 3 pm (13:00 UTC), the area where the convergence was expected. To make the most of the convergence, they downloaded the most recent satellite image while arriving near it.

With that information, they were able to go directly into the best sector of the line. There, they took their last thermal for the next 580 km. Still using the TopMetSat satellite imagery, they decided to go first into the NNW sector where the line was more organised. Then, they “simply” followed this massive energy line, making a U-turn when the conditions were becoming “weaker”. Using this strategy, they did 4 legs of respectively 75, 170, 185 and 150km losing only 600 meters in a total of 580 kilometres…

One of key decisions was to stay in the northern part of the convergence that was looking better in the satellite images. Indeed, a quick look to other OLC flights from that day confirms it was really the best area to fly fast. For example, Olivier Darroze and Christian Lampert did a great flight of 1 160 km.

When they came back to the area Bernd and Reinhard were flying in, their trace shows the local conditions were better there, with better glide ratio and more steady altitude. However, certainly to add more kilometres, they went a bit further in the line than Bernd and the conditions became really different from the racing conditions. Basically, you can notice they lost around 1 000 meters each time flying too much further (green and orange arrows) then turning back in the main convergence.

Congratulations again to both of them and we leave them the last word: “Auch Opas können Spaß haben”!