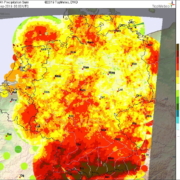 The amount of precipitation is a good placeholder for getting information about the soaring conditions in a specific region. This information is also critical to manage the risk of flood. So national weather services have been developing tools for high resolution quantitative precipitation.

In Germany, the national weather service DWD offers calibrated radar images for every hour of a day. Their observations are based on radar reflectivity measurements [1] that are turned into estimated precipitation rates. This transformation is calibrated precisely, every 5 minutes, using the large network of conventional precipitation measurement gauges (Winterrath et al., 2012).

This accumulated precipitation information can be found in our products. It is called “Fallen Precipitation” in the section of today’s “forecast maps” and in the App TopMetSat. It is available for each hour or accumulated for the last 24 hours. This feature allows you to know which regions have more humid soils, and consequently may show weaker conditions than models predicted. Indeed, the energy of the sun first dries out wet ground. This consumes a lot of energy. During that time, the surface is not heated enough so the development of thermals can be delayed and disturbed. It is also true, however, that spread outs can be expected in the later course of the day if the thermals have started after the evaporation of the ground water. Consequently, this feature is a nice bonus to fine-tune the daily soaring forecast. Before flying, we are also using the last hour fallen precipitation in combination with the weather radar to evaluate the activity of rain cells.

We started this article by stating how much the amount of precipitation can influence the soaring conditions and we are using that feature to prepare cross-country flights. Just for fun, we wanted to compare the rain accumulation over the summer with the German gliding season. We were running through our archives to prepare monthly and seasonal accumulated charts for the amount of rain. This analysis highlights strong differences between regions. Particularly, this year, Northern Germany has been more arid than the South part during the typical gliding period (April to August). This led to better soaring conditions in the north. Accordingly, we observed this year that the clubs from this region are doing well at the OLC Bundesliga[2]. Four of the Top 5 clubs in the Bundesliga are located in Northern Germany. Compared to 2018, none of the clubs of Northern Germany held places in the Top 5. This representation is giving a very good idea of a gliding season in Germany. In a future, it will be interesting to keep analysing those data to identify which region are the most sensitive to rain fall. For now, your local knowledge associated with the “Fallen Precipitation” parameter will be your best ally to plan your cross-country flight. (Hint: Values in the legends multiply by 10)

If you are interested by more technical information, let us know and we can prepare specific blog articles.

[1] Reflectivity is the amount of transmitted power returned to the radar receiver after being reflected at precipitation’s hydro meteors.
[2] OLC Bundesliga is a competition between clubs taking place every weekend between April and August. Club pilots are evaluated by comparing their best average speed on 2,5h cross-country flight. Then the result of the the 3 best pilots allow to rank the club.