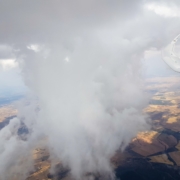 Bernd, co-founder TopMeteo is OLC-plus competition European champion. In 2020, he scored 7,078.17 points in six flights, with the “shortest” flight being more than 1,100 km. And all this in Europe. Let’s see what he has to tell us about this year’s flights.

Congratulations on your OLC European Championship title! Can you tell us a bit more about your best flight this year?

Bernd: Thank you very much. Five of the six flights that were included in the ranking were flown in Spain. But surprisingly, the flight with the highest points was in Germany. And this day did not look like a typical 1000K day at the beginning. But let’s get back to that… I should probably tell you first that my business partner Jon Meis and I had been waiting for a longer time to fly together in Fläming for a few days in a row and then discuss the flights from a meteorological point of view each evening. At the beginning of July, on 8th or 9th of July to be precise, the time had come and the forecasts offered the prospect that it might be worthwhile for Jon to set off from the edge of the Alps towards Berlin. The three days of July, 11, 12 and 13 were very similar meteorologically and promised pure flying fun. High pressure was found over central Germany, without moving much, and shovelled fresh, initially somewhat humid air from the North Sea into the country every day. For us in the eastern part of Germany, this meant that we could start early and the days were long. In fact, I was lucky to bring home 1000K three times in a row, which is certainly not typical for the region of Germany. Now to the day itself: It actually didn’t start fast. The cloud base was over 1000 m high from the start, but the climbs was hard to centre. We went northwest against the wind, which didn’t make things any better. So we decided to turn around and fly downwind when the visibility got worse and it almost smelled like North Sea. And since circling didn’t work, we decided to do only if really necessary. It’s amazing how fast you can sometimes be, with moderate cruising speeds, when your flight path is supported by organized, weakly ascending air like in cloud streets. In Poland the air mass changed, it became clear and then it worked. In the end, it was 1,160 km.

Five of your best flights came from Spain. Guy Bechtold, European vice-champion, also had his best flight there at the same time. How was it to fly there?

Bernd: Apropos Guy. In Spain, I was very lucky to fly with Guy. That’s how we got to know each other many years ago. And to be honest, he actually owns title and honour. In Spain you can learn so much from Guy. He knows his way around there like the back of his hand. The great thing was that we tried something new for me, every day. Above all, I wanted to get to know new areas, even if the weather there was perhaps not quite so great. So we could have a look at the Atlantic Ocean or fly as far south from Madrid as I had never been before. And the fact that we were able to score a lot of points in the process was a lucky circumstance. Of course, a good forecast is also part of it, as well as the reception of satellite images in flight. As you know, we produce the pictures ourselves and have optimised them, as far as possible, for good readability in the cockpit in full sunlight. At the moment we are optimising the transmission of the data. I cannot wait for everybody to see that.

The weather itself in Spain is usually fundamentally different from what I’m used to when flying long distances in Germany. It starts later in the morning and tougher. You have to be patient. But in the evening it takes longer and the sunset is actually sometimes the limiting factor. At least for Guy, who enjoys every minute. But the weather this year was definitely above average. There were many days that allowed distances of over 1,000 km or brought paradisiacal conditions for speed enthusiasts.

You are often going a week or two to Spain for flying. How is it to fly there (airport, airspace, terrain, outlanding) ? Do you have any advice for pilots who would like to go there?

Well, I only can recommend Spain. Fuentemilanos airfield is north of Madrid and at greater altitude, so it doesn’t get quite so hot. Towing and accommodation are no problem, maybe you have to drive a little bit. Even in Corona times everything went very smoothly. But the Spanish are extremely careful and so there were sometimes long queues for restaurants. The neighbouring airfield Villacastin is more tranquil. But both places are equally well situated on the race track, which regularly manifests itself as a convergence line north of or above the mountains. There are more areas with convergence lines, for example in the east near Teruel or south of Madrid in the Toledo mountains. So it is not boring. There are also the Gredos, where the mountain peaks reach over 2500 m. Outlanding is possible almost everywhere without problems, but you have to be a bit careful in the direction of Portugal and in mountainous regions. You also have to be careful with the airspace. North of Madrid this is sometimes disturbing or let’s say better, it could be nicer. 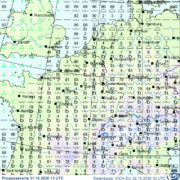 SkyView, a weather viewer from DWD, was many years ago an exciting application to display weather content as layers over maps. In a time when only specialized geoengineers talked about GIS, meteorologists had been forced to display weather content on maps for a long time. And with the then ultramodern Flash from Adobe it was possible to draw vector data quickly and with high performance – including map and weather data.

SkyView was launched in 2000 with the data of the local model LM with 7 km grid point width. This model showed only predictions for Germany and these predictions lasted 48 hours. A fundamental improvement was implemented in 2006: by using the LME (Lokalmodell-Europa) the forecast range was extended to Central Europe. The LME was replaced in its further development by the ICON-EU, which is still the basis of the data for Skyview today.

The operation of SkyView can be called old-fashioned. But after all, in the past and even today, it was possible to superimpose up to four layers of useful information:

Transparent layers had never been used in Skyview, whose current software version dates from 12.01.2015. Therefore the colored area information like coverage, precipitation or the ground gust areas always covered the topography. Since the ICON-EU, the forecast has covered 3 ¼ days and GAFOR still only 6 hours.

SkyView was only overview of the weather as the model sees it – raw parameters. Safety-relevant meteorological parameters for aviation, such as visibility and cloud base, had never been taken into account. So the flight planning was rather based on trust à la: “if no low clouds were predicted, I can fly”. If, however, a high degree of cloud cover was visible in the prediction parameter “low clouds”, one had to improvise or hope. Something you also experience when using many other planning tools, such as Windy. The predictions of TopMeteo offer here for up to 6 days in advance an hourly forecast of cloud base and visibility.

For glider pilots convection was the main prediction parameter. However, a small interpretation hurdle was built in: cumulus with a high cloud base were often marked as Ac/Cc (altocumulus, cirrocumulus). This hurdle is not built in at TopMeteo. Soarable thermals are analyzed as soarable thermals.

At TopMeteo we draw special maps for aviators – with all relevant information in the map. We rely on fast map navigation in always the same map sections. This ensures quick spatial orientation; because who wants to look for Denmark and Italy again and again for orientation when a new map is loaded?

For more than 15 years we have remained true to our goal of offering pilots the advantage of a minimum of time for a maximum of safe meteorological flight planning.

You are using SkyView and would like to continue using something similar in 2021, then try TopMeteo for 14 days without obligation and free of charge:

TopMeteo – where the meteorologists fly themselves