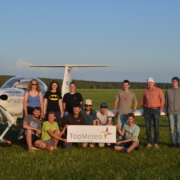 The Akademische Fliegergruppe Stuttgart also belongs to our “TopMeteo-Family Pilots”.

If you are not familiar with the famous German “Akaflieg” (for Akademische Fliegergruppe), they are groups of aeronautical engineering students from German universities. They are performing scientific research into new developments, safety, design, building and ground and flight test of aircrafts, mainly gliders, and then fly them!

In 2003, the Akaflieg Stuttgart was looking for an efficient and safe towplane for their club. They quickly realised that the available planes were not really designed for that purpose and so were not the “perfect” towplane. Consequently, they decided to design and build one!

It was, obviously, a long project, and over the years, more than 60 students were involved. They did everything by themselves: from main design to structural calculation and building methods! With always the idea of a safe plane able to tow efficiently a glider. They decided for a tricycle motor-glider, built in carbon reinforced polymer, with 17,67m wing span and the latest diesel engine from Technify/Continental. The project took many years but, finally, building started in 2010. It was not an easy adventure as project almost stalled when the first set of wings broke too early during a loading test. The students did the structural calculation again and, this time, the wing withstood the required breaking load.

After a small break, the test flights resumed this summer with the crosswind test to evaluate the aircraft behaviour during take off and landing. These tests, with up to 10kt cross-wind, went really well. The team also performed recently usual airspeed indicator calibration, determining the error in the pitot-static system by calculating the effects of wind and air density on the indicated airspeed (IAS) compared to true air speed (TAS) extrapolated from ground speed measurements (GS).

This requires the “right wind speed” from the “right direction”, so this campaign of tests is highly weather dependent. TopMeteo is really proud that our wind forecasts have been used to plan these tests, and to support this amazing team.

The team is now testing the fs35 at different centre of gravity positions. You can follow all their adventure on their blog: https://akaflieg-stuttgart.de/en/category/fs35-en/