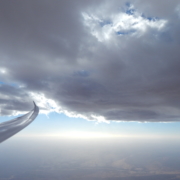 After Bernd Goretzki and Reinhard Schramme already flew very fast flights at the beginning of the season in Namibia, on Christmas Eve another member of the TopMeteo team flew on the long-distance: As co-pilot of Simon Briel, Bernd Fischer reaches 1,400 km from Bitterwasser.
A review by Bernd Fischer:

After analysing the forecasts in the morning I am sure: “Today the convergence will develop over the border mountains between Kalahari and Namib”. The structure is clearly shown in the forecast of the wind field at 450 m above ground, where the arising westerly wind from the Namib in western Namibia slowly builds up eastward towards the Kalahari during the afternoon. Cumuli with base altitudes well above 4,000 m MSL are forecasted in the maps.

The day in Bitterwasser begins with the general briefing. With the remaining participants of Wilfried Großkinsky’s 1,000 km camp, we go more into detail afterwards. The plan: A declared flight of 1,250 km with three turnpoints to use the expected convergence twice.

Shortly after half past eleven, Simon and I take off in the EB28 “3i” from the pan of Bitterwasser – a rather early start time for Namibia. Typically it is still blue at this time of day, but we climb in the first strong thermal up to 1.100 m above ground. Towards Pokweni we cycle under blue skies twice before we reach the first clouds.

Between Rehobot and the Gamsberg develops the first big shower, which we fly along in the north towards the first planned turnpoint “Niedersachsen (Lower Saxonia)”. However, for the Hessian-Rhineland cockpit crew it will be unreachable today, so that we decide not to fly further into the high and rugged terrain with its dubious clouds.

Towards the south, however, the clouds look even better and we can fly fast forward in altitudes between 3.500 and 4.000 m under the first cloud streets. The typical structure of a convergence with its different bases is still missing, but according to the forecasts it should build up in the afternoon. So we don’t fly along the westernmost cloud edge, because there are another two, partly three, good looking (and working) lines more eastward. But the first showers already develop towards the Kalahari too.

Around 15:00, after flying the first 600 km, we reach our turnpoint in the south at the border of the namibian gliding sector. Above the turnpoint we see the last cumulus, while further on towards South Africa – the border is not far away – the sky is totally blue. Simon has to search for a moment, but then a good thermal lifts us back upon altitude: 4,600 m allow us to reach the convergence, which now becomes more and more linear, in a relaxed manner.

The following leg is not common, even for Namibian conditions: The convergence is fully developed. Without any circle we follow straightly the westernmost edge of the clouds. Barely below 4,000 m, the average speed rises and rises. Under the left wing of the EB, the view extends far into the Namib desert, above which not a single cloud can be seen. Here, the inflowing “cooler” airmass already cuts the thermals from below. To the right the view to the east does not reach quite so far, because the showers have already formed to lines and leave only a few gaps in between – we have to keep this in mind for the way back!

Around 17:00, the convergence to the north becomes more unstructured and we therefore let the nose of the EB turn southward again. The rermaining time to Sunset is around 2:30h and we have already flown almost 1,000 km. If the conditions continue like this, the 1,300 km can be rerached in a almost relaxed manner -, maybe even more …

The following 200 km we fly without a circle along the convergence. Only every now and then we fly an arc around the condensations hanging out of the cloudbase in around 4,500 m. We only need a little more than one hour for the distance, the average speed over the last hour(s) rises to 190 km/h and we have even gained height since the last turnpoint.

At 18:10 – 1:30h before Sunset and with almost 210km upon Bitterwasser – we head northward for the last time. Our plan is to follow the convergence line until we have the height for our final glide to Bitterwasser and – especially – until we reach the larger gaps in the shower line. We meet Max Schäfer and Michael Wiech and near Mariental we head towards Bitterwasser – final glide …

After crossing the shower line without any problems, impressive pictures show in the backlight of the sun. Shortly behind the pan of Bitterwasser another shower has painted an beautiful semicircular rainbow in the sky – but the same shower blocks our straight way to gain the last kilometres still missing for the 1,400 km. So we turn to the northwest towards Pokweni. We still have enough altitude and time left – also to enjoy the view of the long stretched dunes illuminated by the sun.

One minute before Sunset, after 9:01h and 1,406.8 km of flight, we are back home on the pan of Bitterwasser. Over the whole flight the average speed reaches 159 km/h, during the time of the fastest 2.5h we reach 189 km/h – but at the end of the day only numbers.

Even if the rear seat of the EB is not really optimized for my body height (or perhaps vice versa 🙂 ) and the flight therefore had some not really comfortable times too, the impressions dominate – impressions of a flight which extend both my flying and my meteorological horizon. My thanks to everyone who contributed to this.

And yes, I love the feeling when the weather becomes as forecasted and one (especially Simon 🙂 ) has made the best out of it …